The premier... and the DVD!

Finding the Pathfinders 11th September 2013, Kinema in the Woods 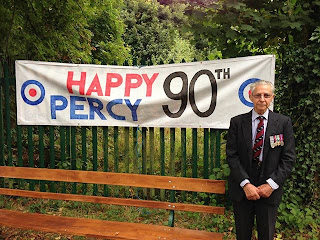 Over 120 people came to support this very special premier at the Kinema in the Woods, Woodhall Spa. Much bubbly, nibbles and cake consumed and we were joined by Chris at the Lincoln Bomber Command Memorial Appeal and Chris Keltie, author of "Riding in the Shadow of Death", a wonderful book about another bomber command veteran.

Sean Taylor from East Kirkby Aviation Centre gave us a fantastic talk on a typical day for a "bomber boy" and the film itself was very well received by our appreciative audience. Many said that they laughed and cried in equal measure!


Thanks again to BBC Look North who came out again to see us. It was a chance for us to thank them for helping us find the last crewmate, Gordon Brown. Without their help, the story would have been incomplete. Thanks also to BBC Radio Lincolnshire for their excellent coverage too. Many of the relatives that we met at East Kirkby made the journey over to see the premier and we were joined by a relative that we had not met so far, a son of Ron Parker from 97 Squadron.

The day was rounded off by an amazing flypast of the RAF Battle of Britain Memorial Flight Lancaster, the "City of Lincoln". They came out just for us, despite a change in their flight plans that day. Huge, huge thanks for giving us three spectacular flypasts that set off the car alarms in the car park! 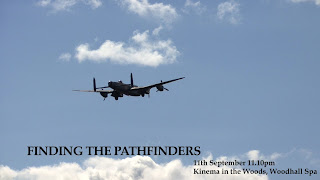 We know that there were many people that couldn't make the screening due to work commitments, or living too far away. We have made available a limited edition DVD of the film, signed by Douglas Percy Cannings of course and you can buy it here simply by clicking on the Paypal button below. A mere snip at £15, plus £3.00 postage, it's a special piece of history. Please accept our apologies if you experience a slight delay as we can't keep up with demand this week! All purchases should be with you within a week of your order date.

Posted by Sharon Cannings at 06:48