After a year of limbo, we're back in business! 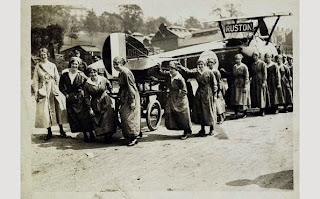 The wonderful people at the Heritage Lottery Fund have agreed to fund our forthcoming drama documentary, "Ghosts of the Skies".

Not a great deal has been filmed regarding Lincolnshire's earliest aviation history, which starts in the First World War. We aim to redress that, discovering hidden places in our landscape and install QR codes at certain sites of interest so that the landscape can reveal more about its past.

At the same time, we want to reveal a little about what civilian life was like for families and those left behind. To that end, we want to make the drama strand of this project truly interactive. We're holding open days in various locations in the county so that people can talk to us about their ancestors and what they did in the war. Perhaps they worked in one of the factories, or remembered the Zeppelin Raids overhead.

We'll also be on the lookout for volunteers to help us with research and with props and costumes, so do come along and see us!


Posted by Sharon Cannings at 04:29 No comments: